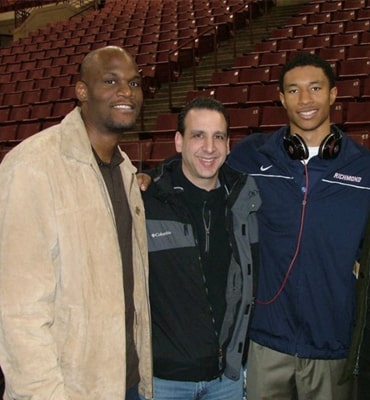 Hoop Dreams Come True A magazine writer with Jordanesque visions but no left-handed lay-up. A couple of brothers who just happen to coach NBA players. Three long hours in the gym.

Make no mistake about it, Wayne Alpert is a thinker. And he isn’t shy about sharing his thoughts either, which makes him a talker too. Wayne thinks and talks about all kinds of stuff–the politics of his native Boston, for one–though nothing gets his brain and his yap going more than sports, particularly basketball. But Alpert’s isn’t just the usual talk-radio blather (“The Knicks suck!”)–it’s, well, deep. Alpert seems to see things that the rest of us just don’t pick up. Which makes him ideally suited for his occupation: personal basketball trainer/coach/guru. Wayne, 48, along with his younger brother, Keith, a strength and conditioning specialist, have been instrumental in boosting the careers of several NBA players. The Alperts don’t work with the league’s superstars; they help players who are on the periphery. They worked with Jon Koncak, a 7-footer who played for the Atlanta Hawks, and their most famous project right now is the Toronto Raptors’ Antonio Davis, who went from journeyman to NBA starter, currently averaging 12 points and nine rebounds per game. (For an excellent article on Davis’ turnaround, in which he freely attributes his recent success to “this little, short, balding white guy,” see the Aug. 20 Sports Illustrated.)

My hoop game is pretty easy to describe. Though I am both a passionate player and a passionate fan (ask my wife how much time I spend in front of the TV watching March Madness this year), I’m not good. Not at all. Where should I start? Five-foot-seven with mediocre hand/eye. Bad left hand. And as I’m 42, any skills I once had are diminishing rapidly. (It’s funny, when I was a kid growing up in Maryland, I remember watching “old guys” on the playground and shaking my head at their pathetic game. Most of those old guys would compare pretty favorably with me at this point.)

As for my last level of organized hoops–if you could call it that–we’re talking college interfraternity league. Most recently I was playing once a week in a church-basement gym. We ran four-on-four on that tiny court–a big help for the wind-impaired. The ceilings were low too, so you had to go easy on the rainbows. Here I was not one of the better players. Give you an idea: Games were to 11, and if I rattled in two buckets, that would be huge.

With all this as background, I figure I can put Wayne Alpert to the test. If he’s really that good a coach, who better to throw at him than me? The ultimate project!

I call Wayne and warn him about my skill level, and he’s still up for it, so I grab my baggy black shorts and gym bag and head up to Waverly Oaks Athletic Club in Waltham, Mass. Wayne and I meet early–to talk, of course–and to wolf down a quick breakfast at Wilson’s Diner. “Can you remember a time when you were playing really well?” he asks. “When everything just seemed to click? When you were doing things that you don’t normally do?” The trick, he says, is to find or learn those things and imprint them in your brain. Food for thought, I say.

Oddly enough, basketball wasn’t Wayne’s first love–baseball was. “I probably could have become a decent small-college pitcher, but I blew out my arm,” he says. So he began by giving tips to others, and the first and foremost recipient of Wayne’s ideology was none other than brother Keith, ten years younger. “In a way, Keith was my biggest turnaround,” Wayne says. “There was an athletic test for kids in his grade school, and Keith was really afraid of it. I came down to watch, and he finished 61st out of 63. It was pathetic.” And so big brother began working on little brother. Coordination drills. Strength drills. Conditioning skills. Over the years, Keith turned into one incredibly fit human being. Today he’s six-one, 210 pounds, trim, and able to bench-press 390 pounds.

As for how Wayne went from working with his little brother to NBA pros, he bootstrapped himself. “I started going to summer tournaments with post-college players and introduced myself. It took time.” He met up with Antonio Davis at an Orlando Magic game.

After breakfast we go to the gym, and I start warming up with Keith. Wayne glances at me for literally two seconds. “Want me to tell you something about your game?” he says. “That’s why I’m here,” I tell him. “You’re relatively quick for your skill level.” he says. True enough. I have some quickness, and some endurance too, from years of distance running. But as for the stuff of a bewitching crossover dribble, fuggedaboutit. I’m hoping Wayne can help me in that department.

Keith gets me to do a quickie set of warm-up stretches. A sort of hokey-pokey. Shake the left leg for 30 seconds. Shake the right one for 30. Hands. Wrists. Does this stuff really do any good? “You’d be surprised,” says Keith. “Just this much helps a great deal. Some people now say that too much stretching is a bad thing.” Hmm. Don’t want to do that. I jog around the court a few times, and then Keith gives up the court to Wayne and the serious hoop part of the day begins.

“I want to teach you a difficult move,” Wayne begins. “Go across the top of the key, right to left, dribbling with your left hand. Big step with your left foot. Then kind of stop-step your right foot, spin around to your left, switch the ball to your right hand, and dribble down the lane to the basket.” Right, got it. Who does he think I am, White Chocolate?

This “difficult” move proves to be pretty much impossible for me. But I soldier on, tripping over feet, bouncing the ball off my knee. And Wayne just keeps offering pointers and telling me to keep going. Eventually I get a little better, or maybe just less bad. It’s discouraging, and I say as much to this Nike-shod Marquis de Sade. He tells me footwork is everything.

“I remember I went to a Patriots game at Fenway Park when I was a kid,” Wayne says. “And I remember watching George Sauer Jr. [who played for the Jets in the 1960s]. He got open every single play and caught pass after pass. I watched his footwork. The next day we were playing football, and I did the same moves he did and got wide open every time. That was when I realized you had to look at the little things, like footwork.”

I’m happy to abandon the “difficult move” for a protracted stretching session with Keith. It is one of those intensive one-on-one regimens that you sometimes see trainers doing with NBA players before games. Given that Keith could snap one of my legs like a twig, I’m a bit wary. I lie on my back, and he brings my right knee over my left thigh, holds it, counts to six, and then ratchets it up another notch. Then the left knee. Then the right ankle over the left knee and so on for about 40 minutes. After which I pop up like a piece of toast. Keith tells me to jog around the gym and asks how I feel. Loose as a goose, I say. Looser than I’ve ever been in my life. Which is a good thing, because it’s time for another round with Wayne.

“Okay, show me your left-handed lay-up,” he says. (Left hand again? Why can’t I do something I’m good at?) He watches me schlump down the lane and clang the ball off the rim. “You know you’re taking off on the wrong foot,” Wayne says. Huh? “You’re taking off on your left foot, and you’re supposed to take off on your right.” More footwork stuff, I growl in my head. When I try going off my right foot, I feel as if I’m traveling. “You’re not traveling,” he says. “Hop, skip, and shoot.” So I do, and for the first time in my life, I’m doing a left-handed lay-up correctly. It feels as if I’m floating. And it’s easy. So why didn’t anyone ever tell me this before, I wonder. (Maybe because he was guarding me?)

After that I try a few more lay-ups, then a few more, and it’s amazing how I actually feel–gee, can I say it?–graceful. Maybe not Allen Iverson, but not Andy Serwer anymore either. (Amen to that!) “Now let’s add some moves to that lay-up,” says Wayne. He sets up in front of me and tells me to fake right and then go left. “Don’t move so much–you lose your balance,” he says. I don’t feel as if I’m losing my balance. “Try it my way,” Wayne says, and I do, and he’s right.