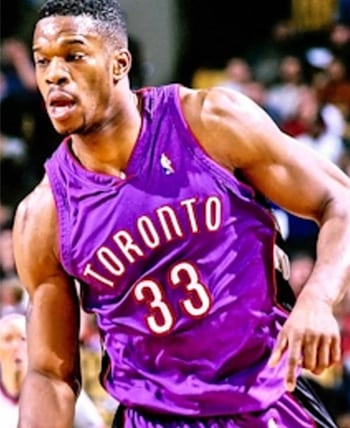 These days A.D. weighs 255 pounds and his body fat percentage is lower than the interest on your car loan. The Toronto Raptors power forward lives in the gym, lifting four times a week over the summer and at least twice a week during the season. At 6-foot-10 he’s a perennial top-10 rebounder and is one of the NBA’s strongest players.

But today, as he rests between sets of pec-dec flyes, he admits that he didn’t make weight training a priority early in his career. He says he lifted only when team trainers told him to, and it showed on the court.

“Even though I was lifting to try to maintain my strength I wasn’t really prepared for the playoffs,” says Davis, who is entering his 10th NBA season. “I couldn’t kick it into the next gear.”

Even worse, Davis says he was a personal plaything for more powerful post players. Guys like Karl Malone and Alonzo Mourning would rag-doll him and he couldn’t do much about it.

“I hate looking like somebody is taking control of me,” says Davis, 34. “It wasn’t that they were better than I was, they were just stronger. That pissed me off.”

After six seasons in the league Davis was sick of the late-season slumps and tired of letting stronger players push him around, so four years ago he called Keith Alpert, a Boston-based personal trainer. Alpert designed a weight program that emphasized strength in the legs, back and abs. The regimen also stresses functional strength and flexibility over bulk and sheer power.

Davis needs strong legs to stand his ground in the post, but he never squats more than 185 pounds. Instead of lifting heavy, he controls the weight all the way down, dips so low his butt almost touches the floor, then unfolds his 6-foot, 10-inch frame to complete the rep.

To strengthen his lats Davis does plenty of pull-ups (the pull-up bar in the Raptors’ weight room hangs nine feet from the floor) and one-arm bent-over rows. But instead of using the conventional motion, which looks like a man sawing wood, Davis turns his arm perpendicular to his body and pulls waaaaay back. It looks like he’s trying to throw an elbow at somebody standing behind him.

That’s by design. It’s rough beneath the basket and NBA power forwards won’t just give Davis room to operate. Most times he has to make his own.

“When I hit a guy I want to know that he feels it,” Davis says. “I don’t try to hurt people, but I have to protect myself.”

Davis sometimes loads the bench press bar with 315 pounds and bangs out a few reps, but he’s not trying to set records in the weight room. The important numbers are his stats, and those have improved every year since he hired Alpert.

In his six seasons with the Indiana Pacers Davis averaged seven rebounds per game. Now he grabs 10. He also scored a career-high 14.5 points per game last season and was an NBA All-Star in 2001.

And the springtime slumps are history. Last season he averaged 10.6 rebounds per game in the playoffs. In the 2001 postseason he anchored the Raptors’ front line despite playing with a torn left triceps.

“Come the third week of April, I’ve got to feel stronger than I did in November,” Davis says. “Every day, every week, every month, the numbers get better. By mid-April I’m ready to go.”