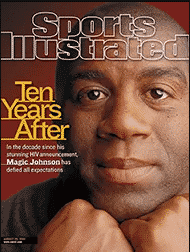 Sports Illustrated – Canadians have another run at NBA title

The questions for Antonio Davis came from members of his fan
club, Club 33, who had gathered at the Toronto Raptors’ Air
Canada Centre on July 29 for a postseason party. Their
names–Mazdak, Ian, Su, Keyano, Raoul, Lindsey, Daniela,
Hans–bespoke the multicultural mosaic of the city they call
home, but their questions struck the same note: Are you planning
to end your career as a Raptor? Have you had the chance to visit
some of Toronto’s tourist sites? What can the Raptors do to help
the players understand Canada better? Do you like Toronto? What
do you like about Toronto?

Given the eager-to-be-affirmed tenor of the queries, you’d hardly
know that 18 days earlier Davis had agreed to sign a $64 million
deal that should keep him in Toronto through the 2005-06 season.
Davis’s decision marked the first time a high-profile free agent
had chosen to re-up with a Canadian NBA team, and it laid the
foundation for an even bigger signing by the Raptors three weeks
later, when Vince Carter agreed to a six-year extension worth as
much as $94 million.

Earlier last month Davis had taken part in a four-way conference
call with his agent, Bill Duffy; Carter’s agent, Merle Scott; and
Air Canada himself. Davis heard the Carter camp trill the virtues
of Toronto and the endorsement opportunities available in one of
the largest markets in North America–arguments that had proved
unconvincing to such Raptors turned refugees as Damon Stoudamire,
Marcus Camby and Tracy McGrady. After he made his decision on
July 11, Davis fielded a congratulatory phone call from Carter’s
mother, Michelle Carter-Robinson, yet another indication that Air
Canada would agree to that extension. By signing their two other
free agents, forward Jerome Williams (for seven years and $40.8
million on July 18) and guard Alvin Williams (seven years, $42
million on July 20), and acquiring Hakeem Olajuwon from the
Houston Rockets in a sign-and-trade deal for two 2002 draft picks
on Aug. 2 (Olajuwon will get $17 million over three years), the
Raptors positioned themselves to be among the NBA’s elite for
years to come.

Yet Davis’s decision to stay in Toronto didn’t come without
bruised feelings. He dallied with the Orlando Magic. (He intends
to settle eventually in Orlando with his wife, Kendra, and their
six-year-old twins, Antonio Jr. and Kaela.) He weighed an offer
from the Chicago Bulls, incensing many Torontonians who wondered
why he would consider abandoning the Raptors, who had come within
a buzzer shot of the Eastern Conference finals, for a downtrodden
franchise, even one based in his wife’s hometown. Most rankling
of all were Davis’s complaints to Los Angeles-based radio
talk-show host Jim Rome that his kids weren’t being exposed to
U.S. and African-American history in school and that they had to
sing O, Canada each morning.

With a late-night phone call to Duffy on July 10, Raptors general
manager Glen Grunwald made those misgivings moot. He said the
team would provide a history tutor for the twins several
afternoons a week as well as a relocation adviser to guide the
Davises through Canadian laws on taxation and residency. Toronto
also ponied up the kind of cash that the Magic couldn’t clear
under the salary cap and that the Bulls weren’t willing to part
with.

So plenty of naysayers remain among the eh-sayers, people who
suspect that Davis, 32, stayed only because he couldn’t get a
better deal elsewhere. “Some people will have to be won over,” he
says. “Canadians are sensitive. They take a lot of pride in their
way of life–their government, their taxes. I love to play in
Toronto, but I have a family and I was torn.”

Davis is miscast in the role of ingrate. His transit from 45th
pick in the 1990 draft to free-agent Croesus has been as arduous
as any career path in the league. He’s a 6’9″, 230-pound
center-forward–O.K., centre-forward–whose game has advanced
incrementally in each of his 11 pro seasons, eight in the NBA.
He’s regarded as one of the league’s good guys, an uncomplaining
rebounder, defender, shot blocker and screen setter. He met
Kendra through that paragon of rectitude, Miami Heat forward A.C.
Green, and the season before last won the Raptors’ community
service award. During the early stages of the talks with Toronto
he pulled Duffy aside and said, “I can’t believe I just turned
down $50 million.”

There may be no better example of Davis’s guileless manner than
his response to a Club 33 member who asked what he ate before a
game. Though Burger King is one of Club 33’s sponsors, though
Burger King bunting hung from the dais from which he spoke,
though the president of Burger King Canada sat right behind him,
Davis was unable to shade his reply: “You’ve got to stay away
from fattening foods, fried foods. A lot of guys are eating
Burger King in the locker room right before a game. I don’t know
how they do it. I eat chicken and lots of vegetables.”

The sudden attention of the off-season has chipped away at
Davis’s ingenuousness. “All your life you talk about making it as
an NBA player,” says Davis, who filed a $50 million defamation
suit against a witness in the recent Gold Club trial in Atlanta
who claimed that Davis had been provided a stripper for his
gratification. “Life was easier when I was coming off the bench.
Now I’m an All-Star, I’m under the microscope, and it’s a strain.
Of course, I don’t have any problems compared with the average
person. Mine are of my own choosing, and I have to deal with
them.”

Over the years he has dealt with problems ably enough. Before
Davis’s senior year at Oakland’s McClymonds High, the coach had
so little regard for his ability that he urged Davis to forget
about playing Division I ball and pick out a junior college. The
father of summer-league teammate Gary Payton paid Davis’s way to
a showcase tournament in Phoenix, where he played so well that
scores of letters from recruiters awaited him upon his return
home. Davis dumped the letters on his coach’s desk.

At UTEP he averaged 9.2 points and 6.1 rebounds almost
inadvertently, to hear him tell it: “I had no post moves, and my
jumper had no arc or spin. I’d throw it up there and hope it hit
something so I could get it back and dunk.” The Indiana Pacers
drafted him in the second round, but they hardly minded when he
kited off to Greece for two seasons and Italy for a third.

He broke his left hand at the end of that last season, playing
with Philips Milan, whose coach had already decided not to invite
him back because of his offensive deficiencies. Still, in the
summer of ’93 Duffy found a spot for Davis on a team he sponsors,
the Bay Pride club in the San Francisco Pro-Am League. Hearing
that George Irvine, then Indiana’s vice president of basketball
operations, was flying out for a game, Duffy ordered Pride guards
Payton, Jason Kidd and Brian Shaw to make A.D. look good. Davis
finished off enough fast breaks and alley-oops to persuade the
Pacers, who had just turned the team over to Larry Brown, to sign
him for two years, with a club option for a third. “I was hoping
he’d be a good cheerleader,” Brown says.

Within three seasons Davis had worked his way into the role of
sixth man and landed a seven-year, $35 million deal. Then, on
Aug. 1, 1999, the Pacers kept a vow to get younger by sending
Davis to Toronto for the rights to high schooler Jonathan Bender.
Davis quickly saw the advantage of the trip north. “I’d been a
backup to Dale [Davis] and Rik [Smits],” he says. “I didn’t want
to look back at my career and wonder what I could have been.”

In a nod to the Raptors’ purple dinosaur mascot, Antonio and
Kendra told their kids that they were moving to “where Barney
lives,” and last season Davis broke out. He became the second
option in the offense, a double-double stalwart–13.7 points and
10.1 boards a game–and Brown’s choice as the Eastern Conference’s
starting center in the All-Star Game after Alonzo Mourning of the
Miami Heat and Theo Ratliff, then of the Philadelphia 76ers, were
unable to play. In the playoffs, even as a left triceps strain
left him essentially one-armed, “he turned [76ers center Dikembe]
Mutombo into a one-dimensional player,” said Charles Oakley, a
teammate at the time. “He’s going to get even better,” says
former NBA player Leo Rautins, a Raptors broadcaster, “because he
still sees himself as having just come over from Europe, trying
to make the club.”

Davis did little more than rebound and block shots in Greece and
Italy. He couldn’t face up in the post. One night in 1993, while
with Philips Milan, Davis found himself matched against Robe Di
Kappa Turin and former Stanford forward Howard Wright. Turin
upset Milan, and Wright went for 21 points and 18 rebounds to
Davis’s eight and seven. It turned out that Wright had a
“personal coach” who had prepped him to exploit Davis’s absent
left hand and flawed rebounding technique.

That coach, Wayne Alpert, is a self-taught 47-year-old who has
worked with such NBA players as Jon Koncak and Donald Royal. In
February 1994, back in the U.S., Alpert approached Davis in
person with an attention-getting pitch: Remember that game in
Turin? When Howard Wright schooled you? I told him how. And I’ll
tell you how.

Davis decided to give “this little, short, balding white guy” a
try. Working with his brother, Keith, a strength and conditioning
guru, Wayne folded the missing elements into Davis’s game. The
Alperts put purpose in his movements, added a left hand, even got
him to face up with confidence and to squeeze off a mid-range
jump shot. “The first game after my first workout with Wayne, I
had six blocked shots,” Davis says. “The next game I had
20-something points. Rik got hurt, and I started and had a big
game, and we won. Before I met Wayne, I was only running around,
working up a sweat. Now when I have a good game, I feel it’s
because I made things happen.”

Davis and the Alperts have worked together for seven years,
speaking on the phone before and after most games, with Davis
flying Wayne and sometimes Keith, too, in from Newton, Mass., for
homestands and some East Coast road games. While Davis was with
Indiana, he met with the Alperts on the sly, not wanting to step
on management’s toes or subject the brothers to ridicule by the
NBA’s clannish coaches and trainers. Now he’s not the least bit
afraid to acknowledge the Alperts’ role in his success. “I want
to show the Raptors I’ll do everything I can to live up to the
commitment they’ve made to me,” says Davis. “I set goals, and I
can’t reach them without Wayne.

“I feel I always have something to prove. I’m insecure that way,
and I guess my insecurity has been a good thing. It’s kept me
going.”

An insecure guy and an insecure town: The two make a pretty good
match. At that meeting of Club 33, one kid asked, “Did you like
any girl in the seventh grade?”

“Sure I did,” Davis replied. “And if you like someone, don’t be
afraid to go tell her. She may like you. You never know what
could happen. Could be a beautiful thing.”